Winn, (not to be confused with the Wynn !) Introduced the banker, among other things, shortly after the turn of the 20th century. Until then, participants played against each other. With the new rules they played against the bank. John Winn also came up with the rule that you can bet against the pitcher, a measure against cheating by the pitcher. If you didn’t trust him or her, you bet against him.

John H. Winn became the father of modern craps with his innovations. But several people after him refined his rules. As early as 1910, craps beat the game Faro, which was the most popular game in America until then. 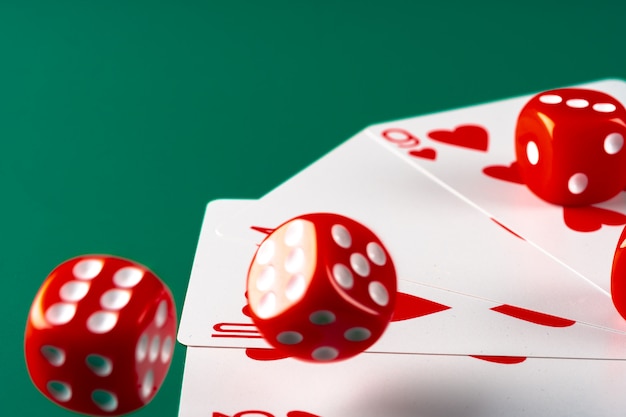 Whatever dice game the Romans played, it has gradually changed. As with all games, rules have been added, removed and varied. But did those changes lead to today’s craps?

Multiple sources report that craps, as Lansky saw it and which is now played in casinos and online casino in singapore, originated in England . Bishop Sir William of Tire is said to have invented it around 1125. During one of the Crusades he was said to have been waiting with his army for a chance to besiege Castle Hazarth. That’s where the name Hazard would come from, as he called the game. Unfortunately for the story, the Bishop Sir William of Tire was born in 1130. The odds that he invented dice games five years before his birth are nil. So we can refer that story to the realm of fables.

Other versions of the story also revolve around the Crusades. The origin of craps is also sought in the game Hazard. Which in itself does not have to be wrong. The medieval writer Geoffrey Chaucer (1343-1400) refers to this game in his famous work ‘The Canterbury Tales’. And who knows, William of Tire (1130-1186) also wrote about it; he became known for his books on the crusades.

But a few things are known about current craps. The English dice game Hazard is taken as the starting point. At one point that came to the mainland, as it is so beautifully called. It spread via French cities such as Paris mainly to southeastern Europe. French emigrants, with a now somewhat modified version, and English brought the game to America in the 17th and 18th centuries.

Around 1800, the French de Marigny de Mandeville family had been living in New Orleans for several years. She owned several plantations there. Bernard was an unruly third-generation son in America. After his father’s early death, Bernard’s guardian sent him to England in the hope that his behavior would improve. But Bernard, who later became known as a gambler and woman hunter, came back with the game Hazard.

He had simplified that, with his knowledge of gambling in America, and converted it into the first version of craps as we know it. However, his variant did not catch on with his friends and acquaintances. That is why he introduced it to his workers on the plantation, which he now owned. They found the game with its simple rules an attractive pastime.

The people on the plantation just played craps on the ground. Others used a table with a raised edge at the time. In the days of Lansky, this was also common with the players at corners. After all, gambling was prohibited (but not on online casino sites like mmc 996 Singapore!). So if a corrupt cop wanted to get hurt, the banker had to be able to take the game board quickly.

After Bernard de Marigny de Mandeville, the game was given local rules. And there was almost always cheating, especially with manipulated dice. To prevent cheating, cardmaker and bookmaker John Henry Winn came up with some new rules. And he improved the design of the console.

If you are interested to know more about the craps game, here’s a video on how to play the game: